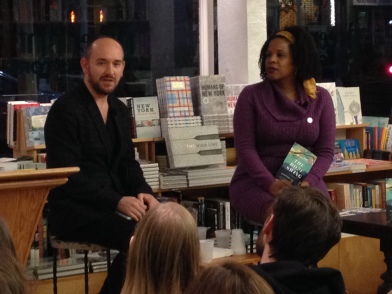 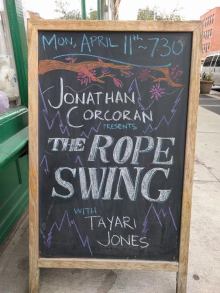 This week, I was treated to a wonderful reading by the charming and talented up-and-coming writer, Jonathan Corcoran, whose gripping story collection, The Rope Swing, came out this Spring via Vandalia Press, an imprint of West Virginia University. Corcoran was interviewed at Greenlight Bookstore (@Greenlightbkln) in Brooklyn by another highly-praised Southern writer of note, the effervescent Tayari Jones, author of the lauded novel, Silver Sparrow.

man in the Southern Appalachias, a particular experience in a “particular time and place,” as Corcoran put it. He went on: “Imagine a time when there was no internet. How do you learn about being gay without the internet? Gay people don’t often have gay parents, so… The world is changing.” The author’s portrayal of this oft-ignored side of West Virginia is complex and full of pathos. I’ve rarely read such a three-dimensional exploration of time, place, and identity.

I must say, dear readers, this could be my favorite new book of modern times. Nay, not-so-modern times! And I’ve been around for a while, if you consider 694 years a long time. A gaggle of notable writers seem to agree with me, including Mlle. Jones and Jayne Anne Phillips, author of Black Tickets and a veritable leviathan of Southern literary capital herself.

It was a true pleasure to hear a conversation between such gifted and intelligent literary figures, a few of the most important of the day. On the topic of LGBTQ discrimination and the fact that society is finally bending towards greater empathy and understanding, Corcoran looked back at the process of writing and of his humble origins: “I came out all right. I came out okay. There’s just as much joy as there is sadness [in this book] .”

Jonathan Corcoran will be reading from his collection tonight, at the Astoria Bookshop in New York City for the Boundless Tales series. Go ahead and purchase it – now! – online from WVU Press. His book tour continues, so peruse the schedule now and see this fantastic writer yourself.

Chet the Sasquatch moved to New York City in the spring of 2014 from the temperate rain forests of the pacific northwest. Read more about him and his ghostwriter, Max.

Words For Dinner – A Podcast For The People

Things That Make Me Look Smart

A Blog to Regret

It's hard being a teenager, especially when you're 30

Critique Collective is your source for information and interviews about emerging and established contemporary artists.

"The most beautiful thing we can experience is the mysterious." Albert Einstein